Is Tyler Perry’s The Oval Overrated? 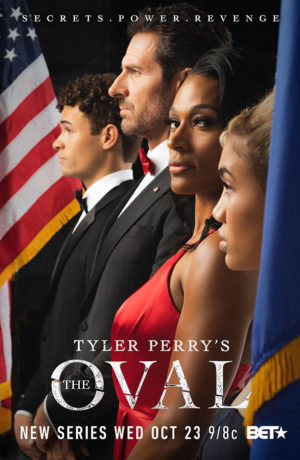 The Oval is a BET soap Opera series that premiered on the 29th of October 2019. A Tyler Perry production, it is richly equipped with a brilliant cast. The first season of The Oval began to air on the 23rd of October 2019 and contains 25 episodes. I began to watch the tv show this June and consequently decided to do a review. 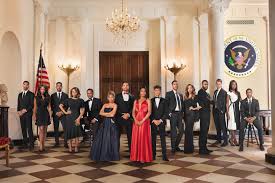 Tyler Perry’s The Oval centres around the life and lifestyle of a newly elected biracial First family; a white President, his African American wife, and their children. A peek into their lifestyle behind closed doors shows that there is more to them than meets the eye. Although seemingly perfect, the family is not in any way perfect as they live and portray a false image to the press and public. They brought with them, to the White House, several secrets, and would go to any length to keep them from the prying eye of the public.

MY THOUGHT ON THE SERIES.

My review is based on 4 major aspects.

In terms of the Originality of the series, the oval has a very rich storyline that is very much relatable in our present society. It focuses on things not being as they appear.

The Oval portrays a family that has its share of secrets and chaos but presents itself to the world as a perfect family for various reasons. It, therefore, mirrors the fact that a lot of things that go on within the homes of people whether or not they are influential are not as they seem. This is definitely something anyone can relate to, either personally or the other way round.

For me, costumes, styling, and set design are important things to look out for in any movie. I want to see how the clothing tells the story, how the makeup on the characters fit into the theme. I look out for interior designs and I try to understand how or why a particular piece of furniture was used or why the main character decided to go with a particular colour and choice of clothing and what this says about the character and role being played.

This means that if you are showing a kidnapped scene, for instance, I want to see things that make it very much believable (I don’t know why I do this, but I’m usually always so curious). In this aspect, Tyler Perry’s The Oval was successful at mirroring and portraying a very believable Whitehouse in terms of aesthetics and design.

I particularly looked out for the styling of the First Lady. From her choice of clothing, makeup, hairstyling, and choice of shoes. There is no doubt that this is an integral part In delivering a successful portrayal of any role. The colours of the furniture, the walls, the size of rooms, the decoration of the Oval Office, the use of white, and mildly cool colours were integrated properly into every setting.

Some of the Cast

I could not help but notice that the casting leaned towards the African-American community however this is not a problem especially when you consider the plot of the tv show. I am also of the opinion that the right choice of casting was made.

I was particularly impressed by the character of Victoria Franklin, the first lady who was played by Kron Moore. She is portrayed as the evil vile mother and wife who would do whatever it takes to protect her image and that of her family whether or not anyone accepted it. She understands that a powerful position requires compromise as long as it didn’t step in her way of power and control.

Watching from the screen of my tv, I myself was scared of Victoria Franklin and I sometimes found myself cringe in amazement at her actions. She alone understands the stakes and the sacrifices she has to make to keep the family together in power. A perfect example of Vile, intelligent, intentional, and deadly.

Hunter Franklin, as the President acts as a president who seems disinterested in being a president. His focus is geared towards exploring his romantic and sexual pleasures rather than being the President of the United States. He seems to be an expert at knowing and doing things that would not only displease his wife, the First Lady but get her miserable. Honestly, Hunter has no business being responsible for anyone not to talk of a whole country.

However, in as much as the Tv show highlights the tumult in the marriage, there were times I wished there was yet another side to the couple. For example, regular scenes or episodes where both of them would ignore their differences and come together for the greater good. Unlike several Tv shows with a similar plot, Hunter is made out to be without any ambition, or desire to will power or intent. His character is made to come across as a very unambitious fellow whose duty is to follow the agenda of those who put him in power. 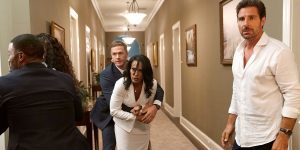 Gayle Franklin as a character is a very interesting one. It is true that we have seen a troubled, privileged teenage kid depicted so many times on our Tv screens. However, she brings something different to her character and she’s able to get your attention in every scene. Ever being mischievous, it doesn’t take so long for you to wonder what she has up her sleeve.

Other times, you might just find yourself being sympathetic to her excesses wondering if there was a possibility she would have turned out to be a happier child if she had different parents. Then again, being abused physically and emotionally by her mother repeatedly there’s not really much surprise here.

I need to state that the role played by Ptosha Storey was one major deciding factor in my decision to review this movie. At first, I was endeared to the character of Nancy Hallsen. She is portrayed as a woman with a good heart, forgiving, loving, and accepting. However, with the release of subsequent episodes, the character became very annoying to me. She begins to portray herself as being weak, too fearful, worriedly insecure, and excessively overbearing.

Jason Franklin, an undoubtedly troubled kid. The First son’s character portrays him as a pervert. He lurks about the presidential residence naked in a bid to entice ladies. Funny right? His intention is mostly to amuse and please himself sexually irrespective of how uncomfortable or inappropriate it may appear or make you feel. 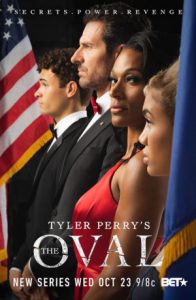 The story is a genuine and creative concept. A dysfunctional biracial first family that would do whatever it takes to hold power, remain in power as well as protect their image. Despite the amazing story, the dialogues to me were sort of lacking at one point or the other. At times, it felt like some scenes were overacted and overdone. I oftentimes found myself fast-forwarding so many scenes because they seemed unnecessary. Beyond the issue of bad dialogues and flat conversations, I think the Tv show is satisfying and a must-watch. Right now, I’m looking forward to episode 22 of the oval.

Finally, In fact, began to follow the tv show this June. I had initially seen clips from the show several times but I just felt discouraged watching the movie probably because of the title “The Oval”. I really was not interested in watching yet another Tv show about the President of the United States. There are countless Tv shows based on that already. I, even so, went ahead to stream the movie and after watching, I fell in love with the first episode. It felt no nice to see Tyler Perry’s interpretation of the White House and all of the affairs. It’s worthy to note that The oval does not focus on the political affairs in the White House but rather the personal day to day drama of the family in the White House. I also have to mention, if you are someone who loves Tv shows with hot, romantic, steaming sexual scenes, then this a show for you. As the tv show continues to air, I would give updates on my review and ratings. However, so far so good my rating is 70/100

I am looking forward to your opinion on the Tv show. If you have any questions regarding the tv show or any other one, please feel free to drop them in the comment section.

4 thoughts on “Is Tyler Perry’s The Oval Overrated?”