Home » Why I would rather listen and talk to a deaf person anyday.

Why I would rather listen and talk to a deaf person anyday.

Oh yes! I would rather talk and listen to a deaf person any day willingly, than someone else. Do not worry, you would understand my reasons as you read further. A deaf person is someone who has totally or partially lost his ability to hear. This makes it challenging for them to communicate and understand people effectively. It is for this reason they make use of sign language and lip-reading. They rely on the reading of lips as well as sign languages to understand what is being said to them. Understanding what is being said to them usually requires their utmost concentration and most times they have to try and read body language to fully comprehend was is fully going on; a skill that most people who are not deaf choose to be oblivious to.

In having conversations with a deaf person, you can get someone who will listen to you carefully (although they can’t hear you) but they listen. The listening skill is a simple skill one that many people are too impatient to have. They appear like they are giving you attention but the truth is, most times they wander away into their own thought. Some do not even realize they have done this. Let me give you a scenario, imagine telling someone about the new bag you just bought and all the design details it has, they may begin to ask themselves why they haven’t even remembered to get themselves that thing they need badly. How does one interpret the true information that is given out subconsciously but not said? How do you listen to what someone is not saying with their mouth?

Listening to what is not being said 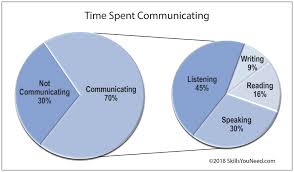 There is an integral part of listening that involves understanding what is not being said. It is the hidden message inside the message. How do you listen to what someone is not saying with their mouth? How do you understand body language? It is important to note that the eyes also speak volumes. A person who has hearing impairment has been able to train himself to communicate not just through sign languages, but lip reading and studying of body languages. Although, lip reading is not an entirely effective way of understanding what is being said given that words can sound the same but mean entirely different things. The truth is that maintaining eye contact is a very good way to listen to what is not being said (my Yoruba people will say, Oju lo ro wa).

It’s not narcissistic in any way to want someone that would truly listen to you. Many people find this very simple thing, difficult to do. It’s like needing the services of a professional painter and he tells you to brief him on what you would like him to create and then he’s finally done with the job and it doesn’t look like what you asked for. The work of art might be aesthetically pleasing yet the important question is why he didn’t do what you (the client) requested for? Does it not feel good to talk to someone who pays attention to every bit of what you say during a discussion? Not someone that would be analyzing the correctness of your intonation or a person that would be in a hurry to respond to what you are saying. Most people listen with an intent to respond not understand. 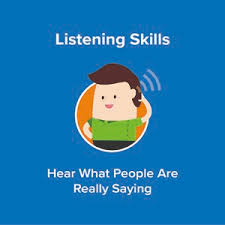 How to recognize someone that is not willing to listen

What I’m proposing here is not for you to begin a search for every hearing-impaired fellow. The very focus of this article is to help us examine ourselves; to understand if we are truly talking to the people we ought to be talking to or if we ourselves are being good listeners in our everyday communications. Are you listening to your friend or hearing him? Are they not the same? you may ask. No! they are not! One is voluntary while the other is involuntary. One involves a conscious mental effort while the other does not.

In recognizing someone who is not ready to listen, you notice that these people are those who sometimes think too highly of themselves. In some cases, they feel they are only trying to buttress the point you are trying to make. Sometimes, it’s more of a habit rather than an action done intentionally. On the other side of the spectra are narcissists who consider their opinions as superior. When you have a narcissist as a friend, they would never listen to you. They are habitual non-listeners and mostly reply with words such as “No I don’t agree” “that’s not right! I have a better idea” and they might even lure you to thinking you never ever come up with any good idea.

A very effective way of making a person listen to you when you talk is by calling their attention whenever you are talking. Sentences such as “you won’t believe what happened next” ” do you understand what I’m saying?”; this makes them more curious. It is also very important to allow them to speak as you don’t want to feel like you are talking to a log of wood (if you do, I’m not judging).

Make the conversation a somewhat interactive one by asking questions.

Another way to ensure that they listen is by informing them of the importance of the topic you are about to discuss with them. You can start by saying ” I have something I would love to run by you, something happened some days ago…”

Don’t listen to them too 😀

Yes!!! don’t listen to them too. This works like magic; it’s not revenge it’s called giving them a taste of their own medicine.

When you stop/reduce the way you give your listening ears to them make them understand your reasons for doing so.